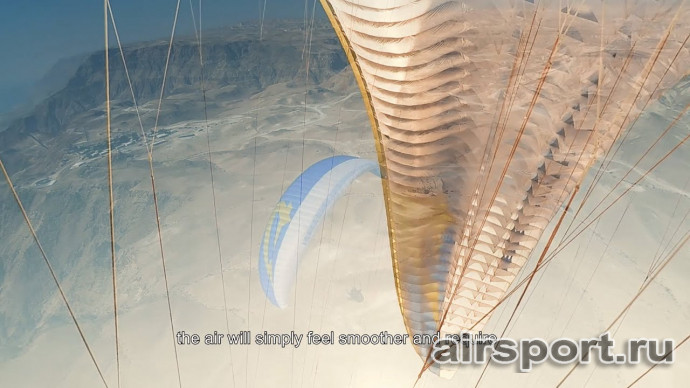 Half Single Skin, half classic paraglider the Hybrid is setting Future standards!

A truly revolutionary glider design – The APCO Hybrid.The Hybrid represents the first wing in this class – a new category of wing in our sport, with unprecedented flying characteristics. This unique design combines a classic double surface profile with a single surface profile, together creating a hybrid profile.

Certified in EN-B category, with all but 2 manoeuvres rated EN-A indicating the real life safety of this unique design!

Putting aside all the hype – this wing must be flown to be believed!

The Hybrid is much more than an exotic wing for special purposes. It offers many advantages over single skin designs and also classic wings in beginner to sport categories. Hybrid wings will become mainstream products within a few years, replacing many classic designs out there. We are proud that APCO is behind such an innovation!

This project has been long and difficult but we are sure the term “Hybrid” will be forever coined into our sport!

BackgroundThis project started off as a concept, idea that we wanted to explore but never expected what we found! The initial test flights of the first prototype have been so impressive that we virtually dropped all other projects in an effort to bring this wing to the market. After 2 years of intense R&D we are now ready!

The Hybrid must be flown to believe all the “hype” around it, but we promise you it is that SPECIAL! Any pilot that had the chance to try it was amazed and after only 1 flight, convinced that this concept is here to stay!

The Hybrid is light (3 kg), but not designed to be a “Lightweight” wing. the absence of bottom surface on the back part of the wing saves weight but is also what makes it fly in such a special way.

PITCH STABILITYThis is immediately noticeable when kiting the wing, if you try to create “dolphin” movements in the air you will understand exactly what we mean! Contrary to a Single Skin, you are not tossed around by the currents, the pilot is in control and will enjoy strong thermal conditions! The Hybrid has enough air mass and inertia to penetrate through the air rather then being controlled by the air.

ROLL STABILITYEspecially dominant with a paramotor – this wing is more roll stable than anything out there. With this wing, there will be NO roll oscillation what so ever!!! When free flying, the pilot will notice that it is “hard” to perform wing-overs. This is due to the increased roll stability of this wing.

BRAKE PRESSSUREVery very low! On a classic profile, the brakes need to be applied against the internal pressure of the wing. With the Hybrid, as with single skin designs the brakes create only drag and therefore are much more efficient. This wing feels accurate and precise, the brakes are progressive and constantly transmitting the air around you.

TAKE OFFTake-off speed is surprisingly slower than most EN A wings. This helps tremendously in “not perfect” take-off conditions. Back-wind of 5-7 [kmh] is not a problem with the Hybrid (common in Hike&Fly take-off spots). Same goes for front launches with a paramotor, few steps and you are airborne. Inflation is as on superlight single-skin wings, it will come overhead and stay there even in the lightest breeze imaginable!

LANDINGCompared to single surface wings, which tend to have very poor flair capabilities, the Apco Hybrid has a flair as good as traditional paragliders in class A or B, only better in that the wing has a very long and forgiving brake range, making manoeuvres such as butterfly landings particularly effective for top-landing.

FLAREContrary to single skin wings, the Hybrid flare is superb! Due to its high stall resistance and long brake travel, it flares like an EN-A wing!

THERMALLINGThe Apco Hybrid has exceptional thermaling characteristics due to its low sink rate in turns and low airspeed capabilities. It will easily settle in a constant angle of bank turn in a thermal, requiring very little pitch or roll input once centred, resulting in a superior climb rate, which will have you at the top of the gaggle in no time.Flying the Hybrid feels like the wing is “taming down” the conditions. 7 [m/s] thermals, will feel like 4 [m/s] with calm and peaceful behavior.

PERFORMANCEThe Hybrid offers performance that is substantially higher than that of single skin gliders, and at trim speed, it is as good as a conventional glider. The custom Sharknose profile keeps the wing highly pressurised and collapse resistant throughout the speed range.

WING FEEDBACKFeedback from the wing is always gentle with no surprises, even in rough air, but remains simple to understand. It requires surprisingly little active piloting to keep the wing inflated and on the desired heading. 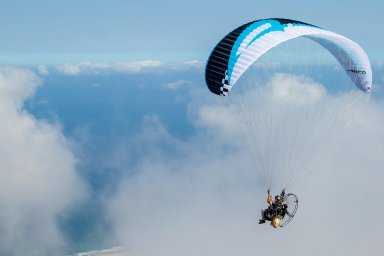 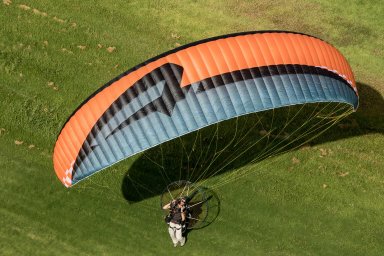